Reflections on the Philippines:  Identity

Saying in Tagalog:  “She could be beautiful; it’s just a pity she’s dark.” 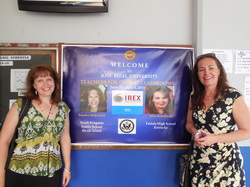 When I arrived in the Philippines, I felt confident that I knew who I was and my role as a teacher.  From the moment I arrived at Jose Rizal University, that role was questioned.  At Jose Rizal University and other school visits I was treated as a celebrity; I was greeted with assemblies, balloons, flowers and even a band.  I was surrounded by teachers and students alike who greeted me with genuine kindness and interest.   Never had I seen such fanfare in my honor.  With the clicking of cameras by school photographers and interviews by school and city newspapers, I asked myself, “Who am I?”  And that led me to look at how Filipinos see themselves.  Such grand treatment must come from a people confident in who they are as a people.  Yet, even a short visit to the Philippines made me wonder.  There are many factors that shape and define the Filipinos, but “white” skin appears to be a focal point as demonstrated by availability of skin care products, media marketing and individual actions.

In stark contrast to Rhode Island youth who crave a golden brown suntan, the young people, and even some adults of Mandaluyoung and Makoti (neighboring cities of Manila),  desired to have a lighter skin coloring.   On my first day out exploring various parts of Makoti I was overcome by the images presented on the billboards.  Many of the images were of Caucasians but more intriguing were the billboards advertising whitening products.  Familiar name brands graced the large billboard signs enticing individuals to buy their products to lighten their skin.    In magazines there are multiple advertisements selling products to lighten a person’s skin.  In one magazine alone, there were 7 advertisements, many of the name brands familiar to Americans.  Driving along the streets of both Makoti and Mandaluyoung there was salon after salon offering services to lighten a person’s skin color.  From skin bleaching, to body peeling, to whitening facials, to underarm wax with bleach, there seem to be an endless selection of treatments to change a person’s skin color.   Back in Rhode Island, the opposite was happening.  Many individuals were spending many a summer afternoon at the beach baking in the sun in search of a sun tan, the darker the better.

In the small beach community of South Kingstown, Rhode Island (population 18,000) where I live there are no less than 8 tanning salons.  The desire to be brown is a year-round preoccupation for some individuals from sunning ourselves at the beach on a hot afternoon to visiting tanning salons in the cooler months and even using the less drastic method of spray tanning all in the name of being brown.    “Some Americans are obsessed with being brown.  Out of the 28 million people who tan indoors, 2.3 million are teens.  The risk of melanoma is 75% higher for people who start tanning indoors before age 35” (dosomething.org).  My seventh grade students point out that people tan to “look healthier” and for a “change.” At the beginning of the school year, students are often seen comparing tans.  People are quick to comment on a person’s tan following a tropical vacation during the winter months.   Regardless of all the negative consequences (premature aging, wrinkles, sun spots, skin cancer, eye damage), about tanning and excessive sun exposure, my students desire to be brown. 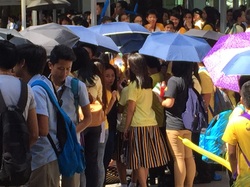 Realizing that the topic of skin color can be a particularly sensitive topic, I was careful about the questions I asked.  When speaking with teenaged girls from St. Paul College, Pasig, about their recent vacation to a beach, they explained that they were not allowed to swim during the hottest part of the day.  Curious, I asked if their parents were worried about cancer causing sun rays.  The girls were quick to say “no!”  Their parents were concerned with their skin becoming darker.  And of course, the umbrellas!  The umbrellas serve multiple purposes.  The most obvious purpose:  providing shade on a hot day.  A secondary purpose:  to avoid skin darkening from the constant sun.  Umbrellas were used by men and women alike.  People made a conscience effort to avoid the sun so as to have a lighter skin coloring.  Another example of presenting a “lighter is better” image was when an adult female powdered her face with baby powder just before a group picture.    In my all too brief visit to the Philippines, these incidents, although quick and superficial in nature, were strong indicators of the pressure people felt to achieve their view of beauty:  Lighter is better.

From the very beginning, I knew I wanted to explore the idea of identity.  My students had written “Where I am From” poems (based on George Ella Lyon’s poem http://www.georgeellalyon.com/where.html) to share with Filipino students.  My co-teaching experience was guided by the parameters of the curriculum due to the national curriculum that is in place in the Philippines and the structure of the school. It would have been wonderful to have had the Filipino students write their own “Where I am From” poems to share with the Rhode Island students.   I would have liked to have had more formal and informal conversations regarding “What is beauty?”  I wonder if I had formally surveyed the students would they answer truthfully or what they think I was looking for.  Would the honesty come from a brief encounter from a nonjudgmental outsider or would it come from an established relationship that develops over time?  In any case, my brief visit and personal experiences were not enough to draw judgements, just more questions.

The idea of beauty and the development of identity promises to be an interesting topic for me to explore with my students.  What is beauty?  What value is placed on skin coloring?  Are there misconceptions that need to be explored?  How does the media shape an individual’s idea of beauty?  How does one communicate beauty to another culture?  What role does history play in shaping beauty?  Seventh grade students are at a critical time in their social and emotional development.  By exploring another culture’s definition of beauty and by looking at the source of these notions, my Rhode Island students can begin to understand how they define beauty as individuals.

In reality, there are far more similarities than differences between our two cultures and the challenges our youth face as they develop their identities.  Questions like who determines cultural norms and why do we follow them are struggles youth must address in both the United States and the Philippines.  Yet another factor is peer pressure.  It is not just the cultural expectation of white vs. dark, but body shape and size, body image (cosmetic surgery), tattoos, piercings, and clothing choices all come into play in both countries.  As educators, we can provide a safe environment for students to look at what forms their decisions and what is considered healthy.
Who I am and what I represented took on an entirely different role upon my arrival in the Philippines.  Because of this, my new and intense travel experience, I now look at my society’s view of beauty through a completely different lens.  I will be able to engage my students in conversations that will encourage them to question their own identities as they look at their own practices and those of different cultures. 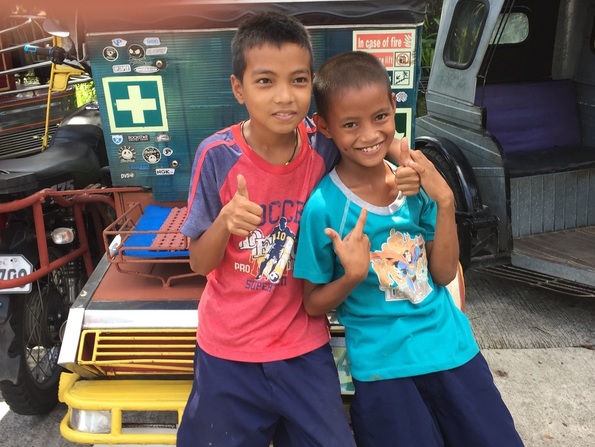